Get Signed Up Now   and get the latest South Tampa/Davis Islands tax and HUD foreclosures, REO properties, bank owned homes, and short sales being offered at HUGE price reductions and significantly lower than retail value.

What truly galvanized Tampa's attitude towards becoming a major metropolis were three distinct events. One: the discovery of phosphate in the area. A find the kicked started the dwindling bay's economy and gave it an adrenaline boost. Two: the breaking down of barriers and frontier mentality, when Henry Plant's "South Florida Railway" cracked open Tampa for every snowbird from the northern region of the States. Three: the decision by Vicente Martinez Ybor to transport his cigar manufacturing operations from its idyllic spot on the Florida Keys to downtown Tampa (Easy access to the sea and a straight and narrow approach to Cuba - where Martinez procured his "clear Havana tobacco”. Plus the use of Plant's railroad to help with the business expansion to other territories made the resolution a done deal). Three financial storms the instantly energized the local community and catapulted the population from the hundreds into the millions.

Davis Island, one of Tampa's most exclusive regions, was formally built during Florida's land boom in the 1920's. The undertaking was part of business tycoon's, D.P. Davis, desire to create a paradise among the constant clatter that Tampa had become; a safe harbor for his nightly rest. He constructed the man-made island atop of two natural archipelagos, "Little Grassy Key" and "Big Grassy Key" at the mouth of the Hillsborough River. He proposed a resort community with three hotels, nine-hole golf course, airport, and swimming pool.

The development fell into an economic abyss when the Florida Land Boom went belly up. He ended up selling part of the original lot for $1,683,582. Six years later, in 1926, Davis was mysteriously lost at sea while making a transatlantic voyage. Many of the original Mediterranean-style structures from that epoch are still standing and have won national Historic Designation.

Many celebrities and local Sports heroes have made Davis Island and South Tampa their landing pad whenever they come to Florida. Derek Jeter being one of its most famous residents.

South Tampa is a section of several communities in Tampa, Florida and is located on the Interbay Peninsula. It is enclosed by Tampa Bay on the west, Hillsborough Bay on the east and West Tampa on the north.

One of South Tampa's distinctive features is its proximity to a revenue of commercial arteries. Roadways that include Dale Marbry Highway, U.S. Route 92 (Gandy Boulevard), West Shore Boulevard, Bayshore Boulevard, Bay to Bay Boulevard, and the Lee Roy Selmon Expressway.

Meanwhile, Tampa as a whole offers a stock of natural and artificial feats to wonder the eye. Beaches that are the envy of any Bahaman village nestled close to majestic skyscrapers the tower over their New York Cousins.

Meanwhile, Davis Island is home to the famous East Davis Boulevard. A commercial area of staggering proportions. Besides several blocks, there are eateries, cafes, pubs, and stores in a peaceful sidewalk setting. The area is very pet-friendly and it encourages a pedestrian lifestyle.

Due to its proximity to the Gulf Stream and Atlantic Currents, Tampa has landlocked the sobriquet of "Lightning Capital Of The World.”

Thunderstorms are a norm in the region; they are fast, furious and usually occur spontaneously. The Weather in the area is constantly in flux.

Summers are humid and hot, with light but delightful sea breezes edging past dusk from the coast. The winters are stable with some minor chills and occasional freak freeze overs.

Exactly like New York, Chicago and L.A, Tampa has an overabundance of boutique, stores and name brand shops to choose from.

Just off the Kennedy Boulevard, one of the many byways that crisscross South Tampa, you'll be faced with one of the region's largest shopping pavilion:

South Tampa is known throughout the world for its fine dining establishments. Bayshore Boulevard in particularly holds in its stretch the historic Colonnade restaurant. A magnificent establishment run by generations of the Whiteside family. It is renowned for its seafood platters and its sunset views of the ocean.

In Tampa, you'll be swamped with excellent culinary options. One better than the other. And, due in part, to its cultural mix of races and ethnicities, your palate will experience new sensations and tantalizing adventures.

South Tampa, as well as Davis Island, is just a stone's throw away from much of the Tampa Bay Era. Just south of downtown Tampa, this district is highly known for its nightlife and its constant atmosphere of after-hours recreation.

Tampa has a total of 208 schools, 133 being elementary, 42 middle, 27 high schools, two K-8s, and four career centers. Plus 4 additional charters. Most of them figure prominently in the nation's best.

Tampa also futures a Campus of the South Florida University as well as the prolific Tampa University.

Tampa is a buffet of delightful often bewildering sights. It pristine beaches and almost Caribbean atmosphere offers the weary traveler and the jaded local a constant stable of exciting possibilities to play with. Nonetheless, one of Tampa's most enduring qualities is the fact that it has amassed a wealth of iconic landmarks. Both officials with the likes of:

To unofficial, earning yet another nickname as "America's Road Side Attraction Capital."

Also, South Tampa has the distinction of having the longest (4 miles) continues sidewalk in the world; The Bayshore Boulevard.

Davis island and South Tampa are by far the area's most high scale communities. They surpassed in elegance, splendor, and chic fair everything else the region has to offer. It is a posh precinct with every want and need you could possibly desire right at your fingertips.

Be the first to know when new South Tampa/Davis Islands short sales, foreclosures, deeply discounted homes, and brand new hot properties come onto the market before anyone else - over 30% more listings than Trulia, Zillow and Realtor.

Do you own a home in South Tampa/Davis Islands and want to find out instantly and completely free what it is worth in today's market - with absolutely no cost or obligation?

You are cordially invited to park your boat, your jet skis, AND your car collection at this magnificent custom-crafted waterfront masterpiece! This amazing South Tampa h...

Agents are owners/manager of the LLC that owns the property. 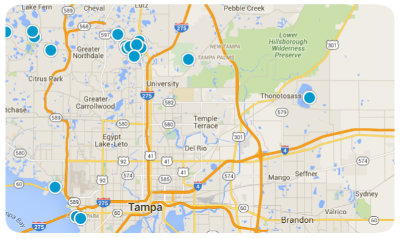